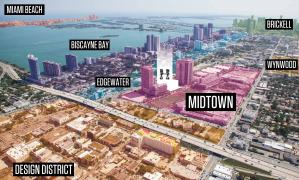 Midtown Miami is the collective term for the Wynwood and Edgewater neighborhoods of Miami, Florida, United States, north of Downtown and south of the Miami Design District. It is roughly bound by North 20th Street to the south, I-195 to the north, I-95 to the west and Biscayne Bay to the east.

In 2005, construction began on the "Midtown Miami" development between North 29th and 36th Street and Miami Avenue and the Florida East Coast Railway (FEC) on what was historically an FEC rail yard. The project is a large-scale, urban development that was planned with 8 high-rise residential buildings, a hotel, two parks, and a major urban shopping area, "The Shops at Midtown".

The Miami Design District is a neighborhood north of Midtown in Miami, Florida. The Design District is home to over 130 art galleries, showrooms, creative services, stores, antiques dealers, eateries and bars. Every second Saturday of each month a community wide Art & Design Night is held from 7-10 p.m.

The Design District isn't just home to funky galleries and unusual art; it is also a high end shopping mecca. Stroll through luxury closet staples like Christian Louboutin, Prada, Louis Vuitton and Hermes, next to carefully curated boutiques and home décor stores specializing in everything from a chic loft look to retro refrigerators.

The neighborhood is home to restaurants by Miami's favorite culinary names like Michael Schwartz and Michelle Bernstein. Find well-heeled locals or visitors in town for an exhibit opening or one of Miami's international annual art fairs.

The Design District is roughly divided by NE 36th Street to the south, NE 43rd Street to the north, NW 1st Avenue to the west and Biscayne Boulevard (US 1) to the east.