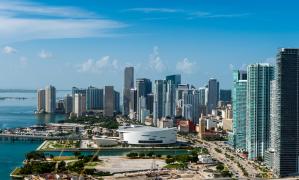 Downtown Miami is an urban city center, based around the Central Business District of Miami, Florida, United States. In addition to the central business district, the area also consists of the Brickell Financial District, Historic District, Government Center, Omni and Park West. The neighborhood is divided by the Miami River and is bordered by Midtown (Edgewater and Wynwood) to the north, Biscayne Bay to the east, Civic Center and Overtown to the west, and Coconut Grove to the south.

Brickell Avenue and Biscayne Boulevard are the main north-south roads, and Flagler Street is the main east-west road. The neighborhood is defined by the Miami Downtown Development Authority (DDA) as the 3.8-square-mile (9.8 km2)-area east of Interstate 95 between the Rickenbacker Causeway to the south and Julia Tuttle Causeway to the north.

Locally known as Downtown, the area is a cultural, financial, and commercial center of South Florida, tracing its present-day history back to the 19th century. In recent years, Downtown Miami has grown and physically expanded to become the fastest-growing area in Miami, with rapid increase in population and the greatest concentration of high-rises in the region. Greater Downtown is home to many major museums, parks, education centers, banks, company headquarters, courthouses, government offices, theaters, shops and many of the oldest buildings in the city.

The Omni, or sometimes labeled as the Media and Entertainment District, is a neighborhood of greater Downtown, Miami, Florida, United States, just south of Edgewater. It is bound roughly by North 24th Street to the north, Interstate 395 to the south, by the Florida East Coast Railway and North East 2nd Avenue to the west, and Biscayne Bay to the east.

Omni is an urban, residential neighborhood with many high-rise residential towers, as well as some smaller scale historic buildings. Omni is home to the Adrienne Arsht Center for the Performing Arts, the old Miami Herald headquarters (now located in Doral, Florida), and the Omni International Mall. Until 2014 it was one of the neighborhoods that hosted the annual Miami International Boat Show[4] at the Sea Isle Marina. The City of Miami Cemetery, one of Miami's oldest cemeteries, is also located in Omni, as well as the historic Women's Club, and some of Miami's oldest churches and synagogues.

Omni is served by the Omni Loop branch of the Metromover and by the Metrorail via Metromover at Government Center.

Park West is a neighborhood of Greater Downtown, Miami, Florida, United States. It is roughly bound by Biscayne Boulevard to the east, Northwest First Avenue to the west, Northeast 7th Street to the south and Interstate 395 to the north. As of 2010, about 4,655 residents live in Park West. The neighborhood is named 'Park West' due to its location just west of Museum Park.