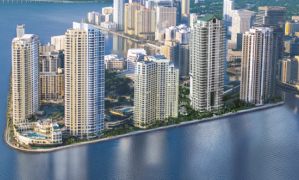 Miami is one of the major cities in South Florida. Famous for its beaches and natural sights, it is no surprise that tourism is the major industry that drives the economy of this place. There are attempts to improve the tourist experience. One such experiment is the creation of an artificial man-made island, Claughton Island. Situated just east of the Miami River and Downtown Miami, this area has another name, Brickell Key.

One can trace the history of this place to 1896 when Henry Flagler organized a 9-foot deep channel from the Miami River mouth. This resulted in the creation of two islands. The island saw the beginning of development in 1943 when Edward Claughton Sr bought the two islands, In 1970 he combined them to make a 44-acre triangular shaped tract. Swire Properties owns most of the land in the area now having acquired them from Claughton.
Spread over a small area of 0.162 square miles, this area had just about 2,200 people in 2010. This is a fairly young population with the median age for men being around 33 and women in the range of 31. This area is populated by more than 52% of foreigners with about 6% of the population not knowing English at all. It is surprising to find such a section of people in the US.